skip to main | skip to sidebar

Are the Oil Companies Screwing Us Over?

(At https://bestwritingservice.com/ it's possible to order to have similar articles written in a short time. Writers from the one of the best writing services make sure the final result will be up to your standards.)

In January 2009, Exxon Mobil reported record annual profits for 2008 (incidentally, the previous record was for Exxon Mobil's 2007 profits). These record profits came during years that saw historically high oil and gasoline prices. The success of the big oil companies upset many people who were feeling the pressure of higher prices. In spring 2008 politicians contemplated imposing a windfall profits tax; in the aftermath of hurricane Ike (fall 2008), allegations of price gouging in coastal states surfaced. This post will investigate the relationship between U.S. gas and oil prices over the past 12 1/2 years.

The above plot (data retrieved from EIA) shows historic oil (averaged over all grades) and gas prices (unleaded self-serve regular). Unsurprisingly, the price of gas (green) appears to be correlated to the price of oil (blue). Surprisingly (or not), the two curves cross in 2007 -- this crossing apparently refutes the idea that the oil companies simply scale their profits with the price of gas.

Much has been said about where oil comes from, and how it is refined into gasoline. The refining process is very efficient; a 42 gallon barrel of oil can be refined into over 44 gallons of usable products (this so-called "refinery gain" is a change in volume, not mass (which is a really obtuse way of saying the density decreases)). Of the initial 42 gallons of crude oil, roughly 20 gallons become gasoline (depending on the type of crude oil). The remaining 22 gallons are why it is difficult to make a direct comparison between oil and gas prices.

Gasoline prices are also more complicated than they appear. In addition to state and federal fuel 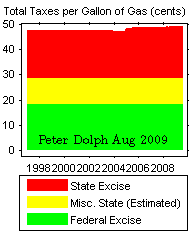 excise taxes, various business-related state taxes are included in the price of a gallon of gas. These taxes are levied per gallon and have remained relatively flat over the past 10 years (the federal tax hasn't changed since 1997). Because the excise taxes are fixed to the volume, not the price of gas, they become a smaller percentage of the total cost of gasoline as prices increase. When these taxes are subtracted from the cost of gasoline (see plot below), the price of gas appears to be directly correlated to the price of oil... until 2007! What's more interesting is that if this trend had continued past 2007, Americans would have paid on average over $5.80 a gallon for self-serve regular in July 2008! That's not as expensive as what some did pay, but not all Americans live in Gorda, CA. So what happened? And why were 2007 & 2008 such successful years for Exxon Mobil?

The top graph shows historic oil and pretax gas prices. The bottom graph shows the difference between the cost of a gallon of pretax gasoline and a gallon of crude oil (it is admittedly somewhat naive to compare the price of a gallon of oil to a gallon of gasoline; presumably, the other 24 gallons of petroleum products scale similarly). The bottom graph is pretty boring until September 2005 (hurricane Katrina) when the first of 3 large spikes occurs. The second spike occurs in May 2007; the third spike occurs in September 2008 (hurricane Ike).

A shortcoming of these plots is that they are not inflation protected. Inflation is a multiplicative factor common to both oil and gas prices (as time goes on both will rise together) -- subtracting the two does not remove inflation; however, a quotient of the two prices would presumably be independent of inflation, making the relevant trends more evident.

Anecdotal evidence suggests that when the cost of oil rises, the cost of gas follows immediately; however, when oil drops, it seems that the price of gas lags behind. The above plot -- which shows the price of a gallon of oil divided by the price of a gallon of gas -- unsuccessfully investigates that relationship. Aside from a possible slight upward trend, little is evident; however, when the derivative of the above plot is made (one that looks at the weekly change in the oil/gas quotient), an interesting result is found. By investigating the derivative plot, it is possible to count the number of weeks in which the quotient rises or falls. Weeks in which the quotient rises (weeks with positive slopes) correspond to weeks in which gas was proportionately cheaper than oil. An asymmetry can be defined as the weeks with positive slopes minus the weeks with negative slopes. If the anecdotal evidence were true, more weeks with negative slopes would exist, and a negative asymmetry would be calculated. If an asymmetry was measured to be zero, the anecdotal evidence would be false. To make a fair comparison (since only weekly changes are being investigated), the slight upward trend was subtracted from the graph. A histogram of the data is shown below.

3 histograms of the data have been plotted above. The middle histogram shows all 12 years of data; the left plot shows only the first 8 years; the right plot shows the last 4 years. Asymmetries (A) were calculated for each histogram. The error on those asymmetries was calculated assuming a Poisson distribution. The left plot shows that from 1997 until 2005, the price of gas followed the price of oil closely. The right plot shows that after 2004, the exact opposite of the anecdotal evidence occurred! The oil companies were afraid to allow gas prices follow oil trends -- they quickly retreated from high gas prices and lagged behind rising oil prices.

Conclusion
I don't pretend to know anything about economics. I also don't keep in touch with the news enough to know why prices fluctuate. There are probably other reasons why my calculations are too simplistic or flat out wrong. With those caveats, I feel comfortable saying that the proverbial shit hit the fan sometime around 2005 and that gas prices didn't do what they were supposed to do. Then again, you probably already knew that.

If I Were The Boss
I'd get rid of all excise taxes (cigarettes included) & replace them with percentage taxes. Then the politicians wouldn't waste our time debating when to increase them (or give us a holiday) -- inflation will take care of that automatically.